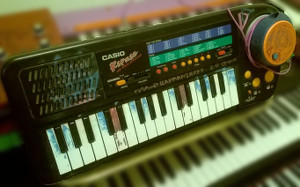 Here’s some secret sauce for you. 26% of songs are in C-major (also bundled with A-minor) as per this article. As for the rest? Well some appear to be in Rap Man Key.

What is Rap Man Key I hear you ask?

Some may call this B flat major. For the hosts of the Fusion Delusion, it’s Rap Man Key.

OK a bit more info? The Casio Rap Man (also known as the Casio RAP-1) is a tiny battery-powered 32 key keyboard with a microphone input (for the vocoder, although it works best as a feedback effect when aimed at the built-in speaker), a bunch of prebaked rhythms (one of which is the best ever - known to the un-initiated as #16 “HIP HOP 1”), a small plastic disc slightly reminiscent of a turntable and a couple of drum buttons. The orchestra hit sound is fascinating.

Anyways, for some reason, it was built to play things in the key of Rap Man. Try it! It’s also interesting how many songs actually follow this pattern.

For the muso’s out there, yes I know it’s not really a key and also it’s not really 100% accurate (pentatonic and all) but it’s cool and who wouldn’t want a portable rap machine toy (cough how can I call it a TOY???) from the early 90’s?

By the way, the image at the top of this blog shows a few customisations including random colours and a fully sick external speaker which is mounted on the turny turntable on the right. Definitely approved upgrades. If you are looking for Rap Man upgrades, there’s a good place to start. Buy a chalk pen and an external speaker. Winning.

Do yourself a favour, hit up the local op shop, find a Rap Man and start laying down some grooves.