So lately I’ve been keeping myself busy by developing my own CMS. It’s an interesting project despite the fact that there are already so many Content Management platforms to choose from, but I’ve come up with something that works well for me. Here are my thoughts on the process.

But first! A special mention to Hugo. It is such a simple way to build fast sites. Very impressed. You should check it out.

Why do this? It’s madness building your own CMS! (aka the tl;dr)

Yes. Building a CMS will make you crazy if you aren’t crazy already. But there are also lots of reasons why this plan came about. Mostly, however, it was from talking to the DevOps people at work about how they would make a website without using common open source CMS’s running things like Wordpress, Drupal, or something else. Static HTML was the flavour of the day, so I thought about how I could come up with a solution which is delivered like a static HTML website but is also easy for clients to update. I can see people learning some Markdown but going as far as learning Git is probably out of the question.

The most obvious alternative would be to have Drupal or Wordpress locked away somewhere with the output written to a static site, but things could be a lot more fun than that!

My approach (and objectives):

Time for a bit of a diagram. 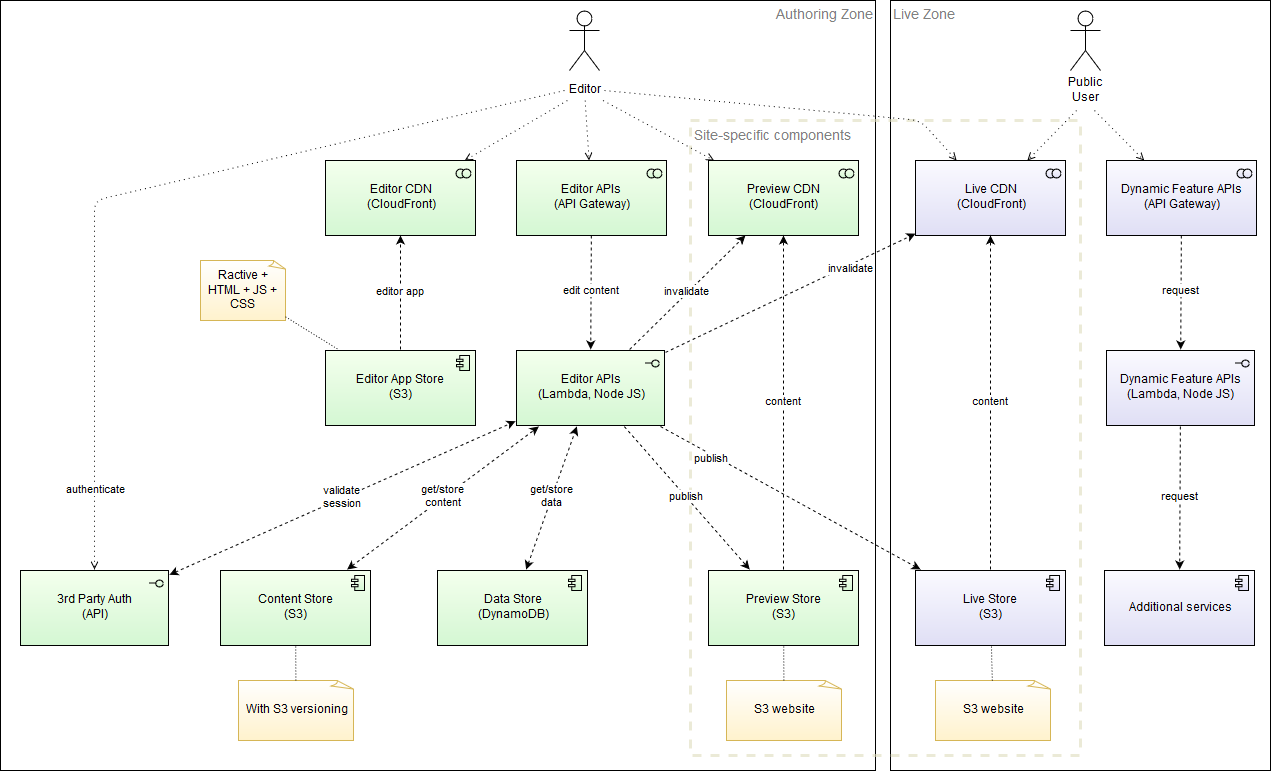 The plan was to look at what templating engines were available and work from there. Jekyll was considered early on, however Hugo came out on top as it didn’t require any dependencies to be installed to make it work. A single executable is all that is required, and it works just as well on Windows or Mac as it does in the AWS Lambda environment.

Templates would be converted into HTML chunks that Hugo understands and combined with static JS/CSS resources. This has the added advantage of buying templates in HTML format being a whole lot cheaper than Wordpress or Drupal equivalents.

All content would be authored using Markdown, because it seems quite simple and gets the job done without too much baggage. Users won’t be required to learn Markdown through tools that help mark up the content with a menu bar of formatting options. Simple and cheery. Add a bit of YAML to configure some metadata attributes and pages would be good to go.

Source files would be uploaded to S3. Versioning switched on to save those embarassing moments when something needed to be rolled back and metadata applied to record which user made the change.

The Hugo executable is deployed inside a Lambda function, running Node JS, sitting in AWS. Now, originally when the system was built, Go was not available in AWS Lambda, however since that’s now a possibility, this could change.

From that point on, ignoring utility functions like backups, Lambda functions don’t execute unless content is updated or a dynamic feature like a “Contact” form is submitted. So the server costs of running such a system are super low and are basically storage (very low) and cost of delivery via the CDN.

Talking about functions, the system is API driven, with a separate API for the editor environment from dynamic features on sites. The editor itself is essentially a static HTML website which forms API calls and lets users modify their websites. Authentication is handled by Google, because it’s easier that way for users and for me. Users are of course encouraged to use 2FA on their Google accounts.

The content editor is based on an HTML template that I bought, which is a great approach when you don’t have 1337 front-end skills (such as me), but want something to look nice and known to work across multiple browsers. It’s also quite inspirational to pick and choose all kinds of example UI elements without having to think too much about building them. Decent modern browsers like Firefox, Chrome, Edge and Safari are supported. Internet Explorer, no way.

What else is there? DynamoDB stores some persistent information that would normally go in a traditional database, mainly to keep the serverless thing happening. AWS API Gateway provides a way to call all of the AWS Lambda functions (which are written in Node JS), and of course other essential AWS services like Route 53 are involved too. Some customers have DNS hosting at their end so that’s left untouched in that scenario. There is quite a lot of CloudFront going on plus the freebie SSL/TLS certs from AWS make the whole thing a bit nicer.

Twelve sites are now powered by this AWS-powered Hugo Serverless CMS (including this one). They came from a variety of sources and some took longer than others to convert over, but once I had the process started I was on a bit of a roll with chopping up the HTML into templates (the most time consuming part) or creating Markdown files (super easy). Some of the sites were Drupal, some Wordpress and others Jekyll.

The great thing about this process is that it is super quick to make changes with Hugo running on your local machine, then you can deploy to the web and it’s very reliable in getting the same result. The dev cycle with Hugo running and picking up changes is quite nice, to the point where you don’t even need to press F5 to reload the page in your browser.

Here is one of many screens available, showing the SimpleMDE Markdown editor, with some niceness coming from the purchased theme “ProUI” by Pixelcave. Editing this blog entry is shown in the image below.

Naturally, this still needs a bit of work - for example, the File Properties section is too techie and it’s generally a bit of an over-engineered file editor. But I think the focus is always to make it work before making it amazing.

Let’s talk scaling for a moment

Overall, the solution scales pretty well. Lambda performance is fairly predictable especially since it’s only used when modifying content. Actually delivering content to the audience with S3/Cloudfront is also quite good.

DynamoDB is OK but not great. Although recently AWS has corrected it with a bit of elastic capacity for reads and writes, which is welcome. You could say it’s a lot more “dynamo” now.

Hugo is quite unscalable and is probably one of the biggest weaknesses for scalability. At the moment, the process to publish is monolithic: You have to publish every page every time. Small sites with about 50 pages publish in a couple of seconds, which is quite rad. Larger sites with 4,000 pages take about 40 seconds, or about 100 pages per second. It’s actually quite good considering, however it would be nice to have a model where the processing of Hugo could be split into different Lambda invocations for parallel publishing.

There are still a few niggling issues which aren’t fantastic. Here’s some of my thoughts: