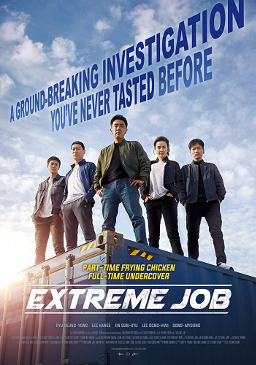 Recently I got back from my first trip to Europe, which turned out to be everything I thought it would be.

But actually: Today’s post isn’t really about Europe at all. The thing about Europe is it’s so damn far away from Australia, so I actually watched a fair amount of movies on the plane this time, which was a first for me. I put this down to the 22.5 hours spent flying combined with the movie selection onboard the flights being surprisingly decent. I managed to fit in 7 films and I’m going to embark on a series of short movie reviews of all 7. I’ll be posting these in memory order, starting with…

In Extreme Job, a group of failing police officers try a new tactic and buy a struggling Korean fried chicken shop in order to bust a drug cartel’s operation. They go on to make waves in the social media space with their original recipe, which is a blend of pork rib marinade on fried chicken. Yes, you heard that right, the fuss are making crazy-good fried chicken.

It’s such a silly premise, but so fun to watch all the same. This reminds me of the kind of movie that David would say was “too silly” but Margaret would respond with “Oh but David, it’s just a bit of fun!”.

At one point I was laughing so loud, my wife complained from the row in front. I had forgotten I was flying in essentially a public place and the general volume level inside the A350’s cabin was surprisingly quiet, for a plane. I find planes are a bit like being at a rock concert for 8 hours straight, so I like to use noise cancelling headphones or earplugs, but on this occasion I was probably disturbing everyone else’s peace with my loud laugher.

The movie reminds me of authentic Hong Kong style action (complete with a hopeless-police-theme too whereby the fledgling constabulary team is being told they’re off the case, of course) and fans of Jackie Chan flicks like Project A (1983) or the Police Story series. Only this time, in Korean.

Being in Korean, it posed a bit of a problem. I had to read subtitles. I normally find subtitles are not an issue because often the dubbing & voice acting process for foreign movies distracts too much from the original. Anyways, eating a meal on a rapidly moving object (a plane) while trying to read subtitles is quite difficult and I had to keep rewinding bits to make sure I didn’t lose any key dialogue.

After returning to Sydney, I asked the local Korean cafe owner if he’s seen Extreme Job and he chuckled and said yes. That’s a ringing endorsement if I had ever asked for one during a brief 10 second morning barista chat.

It’s not all roses though. There’s nothing really new to learn here and the twists and turns aren’t unpredictable - but they are amusing all the same. I won’t reveal any here because that would just spoil things for those who haven’t seen it.