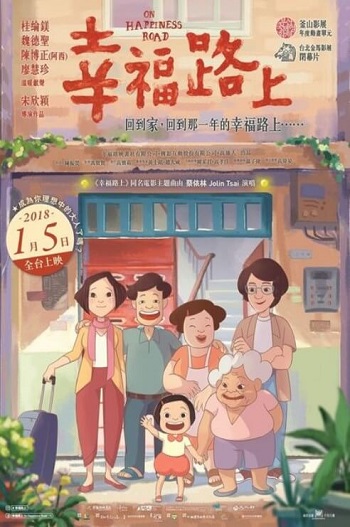 This is my fourth installment of movie reviews whilst travelling to and from Europe. For the previous reviews, check out posts tagged with film.

I really hooked into the animations this trip, to the point where half the movies that I watched were animation. I am a fan of animations of course, but I haven’t had the time to watch much lately. On Happiness Road was a deeply refreshing movie, in part because of the storyline being so fascinating but also because it’s simply a Taiwanese animation. I haven’t come across anything similar to compare with, but since I was watching the movie onboard a Taiwanese airline so I think that totally makes sense.

The story is a sentimental journey through coming of age for a girl called Chi who grew up in Taiwan. Later in life, she moved to America and it was only when she returned to Taiwan that she realised how much things had changed in her home country.

I particularly found how Chi responded to her grandmother as being “barbaric” to be so curious - that someone not that much older could be so different. It also reminds me of stories of my great grandmother who would be the one eating fish head soup and making sure that no organ of the animal was wasted. This is something I think a lot of people forget these days and it wasn’t that long ago that these things were ‘normal’.

It’s fascinating that characters like Betty - clearly shown to be white in the movie - are first generation children living in Taiwan, sometimes from unions with American solders or other transient folk during Taiwan’s occupied history.

I’m told that the direct of On Happiness Road, Sung Hsin-yin, based the story on her own experiences and the richness of the characters is a testament to this. I found it interesting that Chi left Taiwan to pursue a career and an education in the United States, yet as I visited Taiwan briefly I could see myself move to Taiwan for all of it’s progressive differences from my homeland Australia. Have we stopped moving forward at pace and have countries like Taiwan moved so very fast that in fact they have completely overtaken “The West” and now we are the ones who are behind?

It was particularly fitting to watch such a movie when travelling to Taiwan - for I transited via Taipei on the way to Europe - to peek into the history of Taiwan. Issues like the process of converting from a martial-law dictatorship to a democracy and even natural disasters like the 921 earthquake in 1999 are also present in the film. What would a coming-of-age animation set in Australia be like? Would it have scenes like Port Arthur or the Cronulla Riots? The Newcastle Earthquake? The closing of climbing of Uluru to tourists?

I’ve read that the film is quite dark but I didn’t get that feeling at all. The ending is quite bittersweet. Sorry, no spoilers here. You’ll have to see it for yourself, which I quite recommend in doing.