A history of my corner of the web

This blog is super-condensed but showcases some pretty spectacularly terrible 90’s website design. I’m sure I’m not alone in thinking some of those early sites were pretty amusing!

I’ve been interested in the web for a long time. When I say, web, I mean the Tim Berners-Lee web, which basically revolves around HTML, URIs and HTTP and provides a way to access information from all around the world without having to log onto different computers to get the information.

By no means I was an early adopter of the web, having been invented years before I dialled in. When we got the internet at home in 1996, I was instantly fasinated by the ability to create your own website, just like how I used to be fascinated by how software was written (I’m strange like that).

During those great early days, ISPs used to give FTP credentials and a modest 10MB or so of space for your own personal website. I’m not sure exactly how many people used to use the web space (often people would use email addresses) but it was nice that it was there.

At one stage I even hosted some websites from home, although having a pseudo-permanent dial-up connection wasn’t exactly the best performing connection to do that. I remember accessing my home webserver from highschool, which was an interesting feat for me at the time.

My version of Netscape, affectionately known as Nixscape

At some stage I discovered Netscape Communicator and started using it to lay out terrible looking mid-90’s websites with tables and bad colours. I didn’t spend much time learning HTML initially, since it was easy enough to just use the WYSIWYSG editor and liberally apply bright colours and animated GIFs to everything. In those days, the web was innocent but harsh on the eyes. 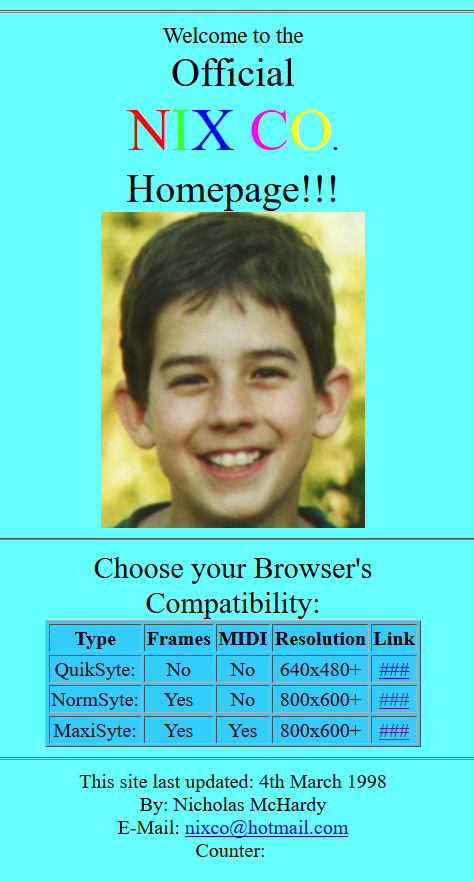 Yep, I warned you

There’s so much going on in this ‘landing’ page for one of my earlier sites, I just don’t know where to start. The super young photo of me? Spelling site as syte? The resolution limitation? How about auto-playing embedded MIDI files? Très cool.

I’m still trying to find some of my sites in the various Geocities archives floating around the modern web. I know it’s in there somewhere, but I can’t for the life of me work out the path under “Silicon Valley” that was mine. It had a bunch of hopelessly terrible 90’s web design just like the example above, so I definitely need to find it one day just for a laugh.

Speaking of design, here’s another. 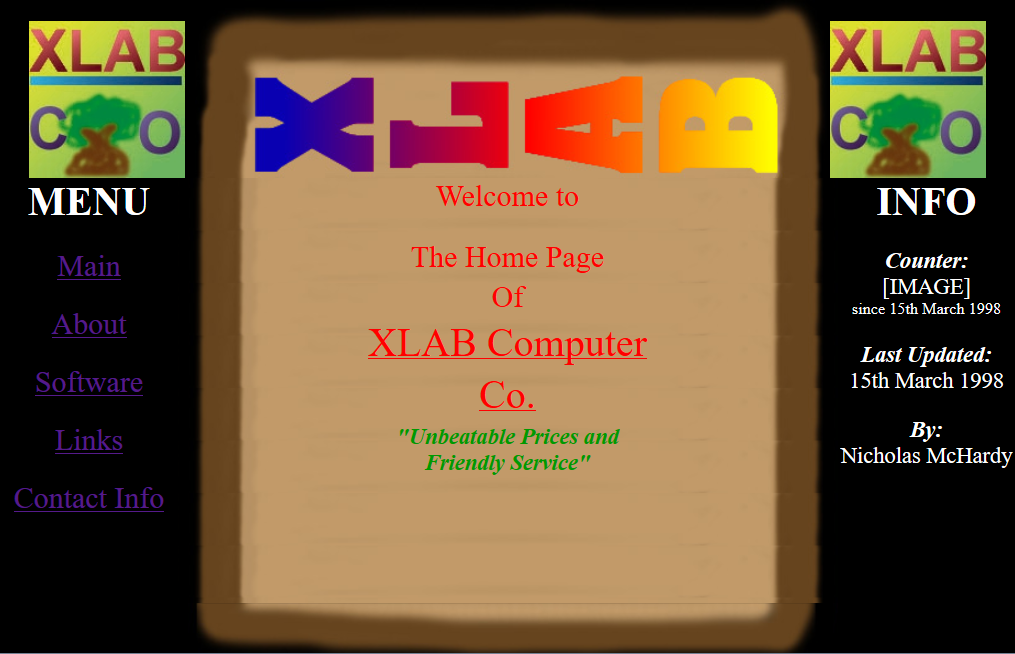 I don’t know what’s more surprising, the terrible design or the fact that a modern browser still renders this website from March 1998 just fine!

When I was growing up, I invented a fake company called XLAB Computer Co. It didn’t produce any real software (well, apart from some lousy ‘screen savers’ written in QBasic and some over-engineered menu systems). Once the internet rolled around, of course XLAB needed a website presence, so I busted out my shockingly awful Photoshop skills and overused the airbrush to draw everything. Oh boy. I had some pretty creative ideas poorly executed during this time. Probably wise that I stuck to more development and solution design activities rather than visual design! 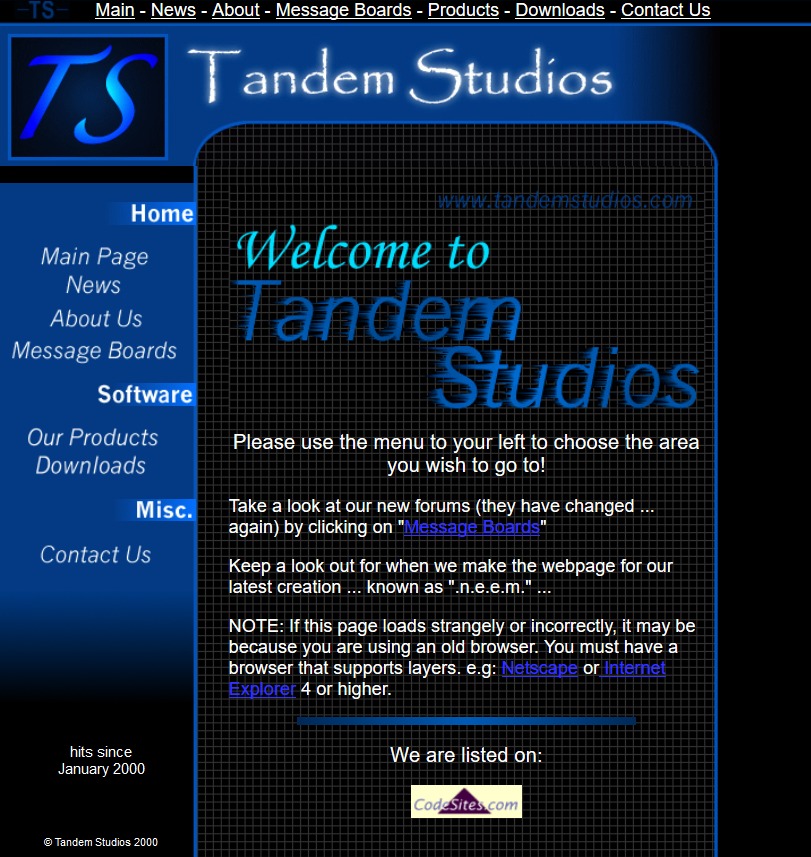 I think a lot of this design came from reading Photoshop tutorials.

Combined with some friends from high school, we formed Tandem Studios (2000 - 2002) which was another software company, because everyone needed their own software company. We produced one game called Mercator (well, part of it, as I don’t think we ever finished it) using Visual Basic. With no other products on offer, we were proud of our Tandem Studios website which was hosted on Cobalt RaQ servers at a hosting company called Tera-Byte. My friend’s dad paid for the domain registration and I was pretty amazed that we could have our very own domain name, just like real companies. They used to be free, of course!

Everyone had one of these back in the day, right?

Jumping around different free web hosting companies, including ones which insert banner ads on your site (does anyone remember using Jawascript to confuse the insertion of some ads?) I picked up an account at Spaceports and launched Nix Gateway Web Design in 2000. Sure, I didn’t really design any websites beyond my own, but I pretended I did.

This template, which come along in about 2003, was actually pretty safe on the eyes

After starting uni, it was time to buy a real domain and start playing with PHP. I picked up nisch.org in 2002 and created “the nisch.org network”. I can’t remember what the network really consisted of exactly, but I spent some time writing my own PHP based website which featured some blogs, a ‘yell’ box and lots of photos from various activities during uni. It was a bit proto-Facebook, except that only I could upload photos. People could comment, though.

Eventually, I sparked on the idea that nisch.org was too hard to spell (and didn’t mean a lot to anyone) and I purchased nickmchardy.com in June 2014. Part of the reason was it was a period when I decided to start using Nick rather than Nicholas and updated my LinkedIn profile to suit. I’m still using nisch.org, but it’s annoying when having to quote my email address. N sounds like M. S sounds like F. It doesn’t spell anything that is remotely recognisable to people. Anyways, I imported a bunch of blogs from nisch.org, checked out some options around using Drupal, and commenced reinventing my site. My site is still there, 5 years later, so it was probably a good move, although I have moved on from using Drupal.

Nowadays I don’t use free hosting. Or my ISPs hosting. Or PHP. Or Drupal. Or most of the tech which I played around with over the years. Oh yes, with one exception, and that’s HTML. But I prefer to write in Markdown these days, using Koi CMS.