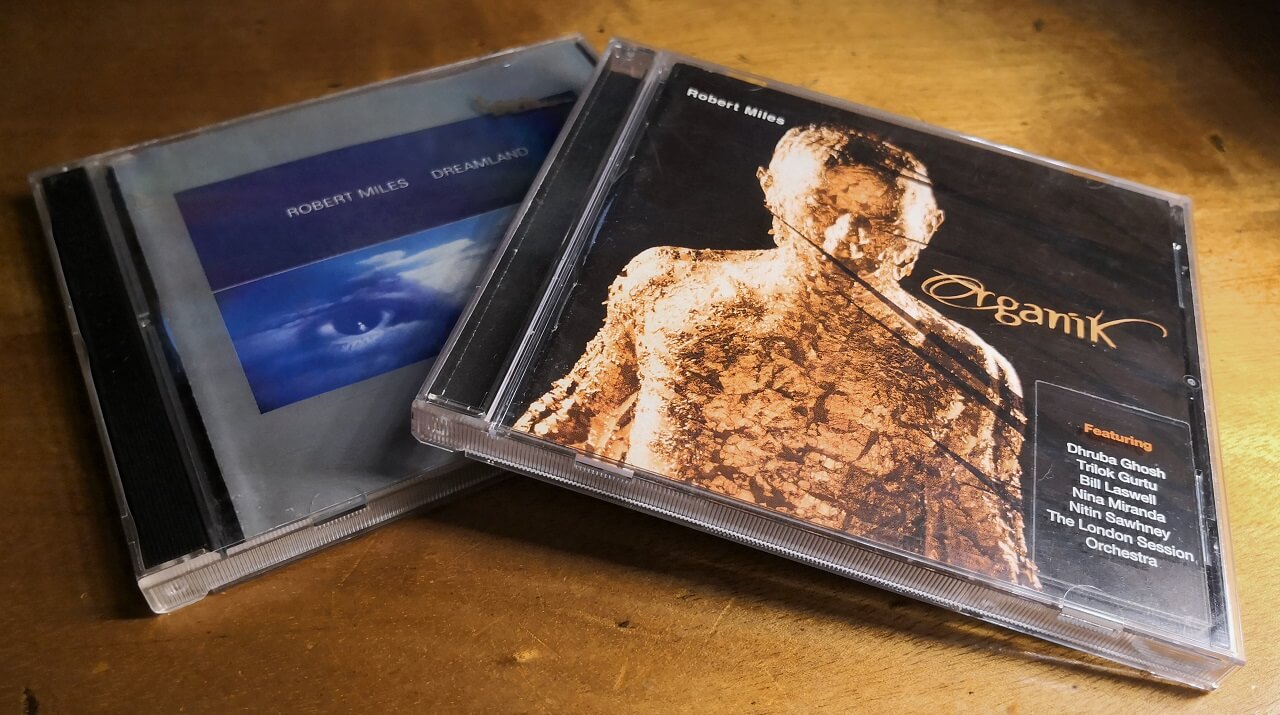 Today’s post is a deep-dive into the late Robert Miles, a driving force in the formation of dream house and someone whose music I’ve spent far too much time listening to over the years! This blog is part-tribute and part-analysis. The best kind of blog. Plug in some headphones.

I’m going to go through his back catalogue of albums, key facts, my take and my fledgling collection. We’ll start this journey from his first and most successful album, Dreamland.

Released in 1996, this album not only solidified what ‘dream house’ or even formed an early foundation of the ‘dream trance’ genre, it really broke through into the charts with an instrumental dance number called Children. Not that I follow the charts a lot, but it’s an impressive feat. Number 5 in the ARIAs. I’m sure most people have heard it as “that dreamy dance piano track” from the mid-90’s.

I doubt it would be the first trance track, possibly that goes to Roland Brant’s Nuclear Sun from 1993, although at the time I note that the record says “trans” on the centre label.

Anyways, back to Dreamland. Amazingly, as I write this I realise it was released about 25 years ago.

I first came across this album pretty early on … possibly even in 1996 shortly after it’s release. I can’t be sure. But it was given to my brother from one of his friends, copied from a CD onto a cassette tape. The initial “thunder” sample on the opening track Chidlren (Dream Version) was incredibly ‘coarse’ sounding, almost like it had way too many digital effects applied to it. At the time, I thought, “Ah, it must just be the quality loss from copying a CD to a tape”. Actually, it’s pretty coarse on the original CD as well.

I mention obtaining a copy of the album on tape because piracy was such a big deal during that time, however it was really nice to ‘demo’ the album and then since my brother and I liked it so much, we went and purchased the CD. I was never a fan of the quality of cassette tapes anyway.

Let’s talk about Children for a bit.

I remember downloading the sheet music for this track - it’s not complicated - but actually quite a lot of fun to play on the piano. I spent a lot of time playing printouts of MIDI files and this was one of the rare songs where I found a transcribed copy online.

Recently, I learnt that part of the melody on the hit ‘Children’ came from the Russian song “Give Me Water” (or “Quench My Thirst” depending on which translation you trust) by Garik Sukachov which can be heard below:

A few cluey people have talked about Robert Miles “ripping off” the melody but I’m told that he gained permission to use these phrases for his song “Children”.

But that’s not the only claim of IP infringement, as a lot of people have talked about the similarity of Children with “At First Light” by Patrick O’Hearn from the 1985 album Ancient Dreams. Have a listen.

There is no doubt a familar passage here! I can’t be certain for sure that Robert Miles heard this and then replicated it, but I do know that as a musician it’s easy to pick up ideas from anywhere you travel and then to noodle around on the keyboard only to land on the same melody. It just works and everything clicks into place, probably because you’ve heard it before. I like both interpretations and they both take the sound and feeling in different directions.

For comparison, here’s Children - the “original” version, which is more similar than the “dream” version:

A few people have talked about why Robert Miles wrote the song Children and there are a few different stories, but they mostly centre on his concern for people dying in car accidents after driving home from a huge night in the club.

“Dreamland” was one of the first albums I transferred onto MD with my Sony MZ-N1 NetMD in 2002! Good times. I quickly filled up a pack of 10 MDs and once they were full, just listened to the same albums over and over without changing what was on the discs. More recently, I picked up a copy of Dreamland from either Vinnies or a library who were moving their CD stock on. Anyways, it’s nice to have a real copy for myself. 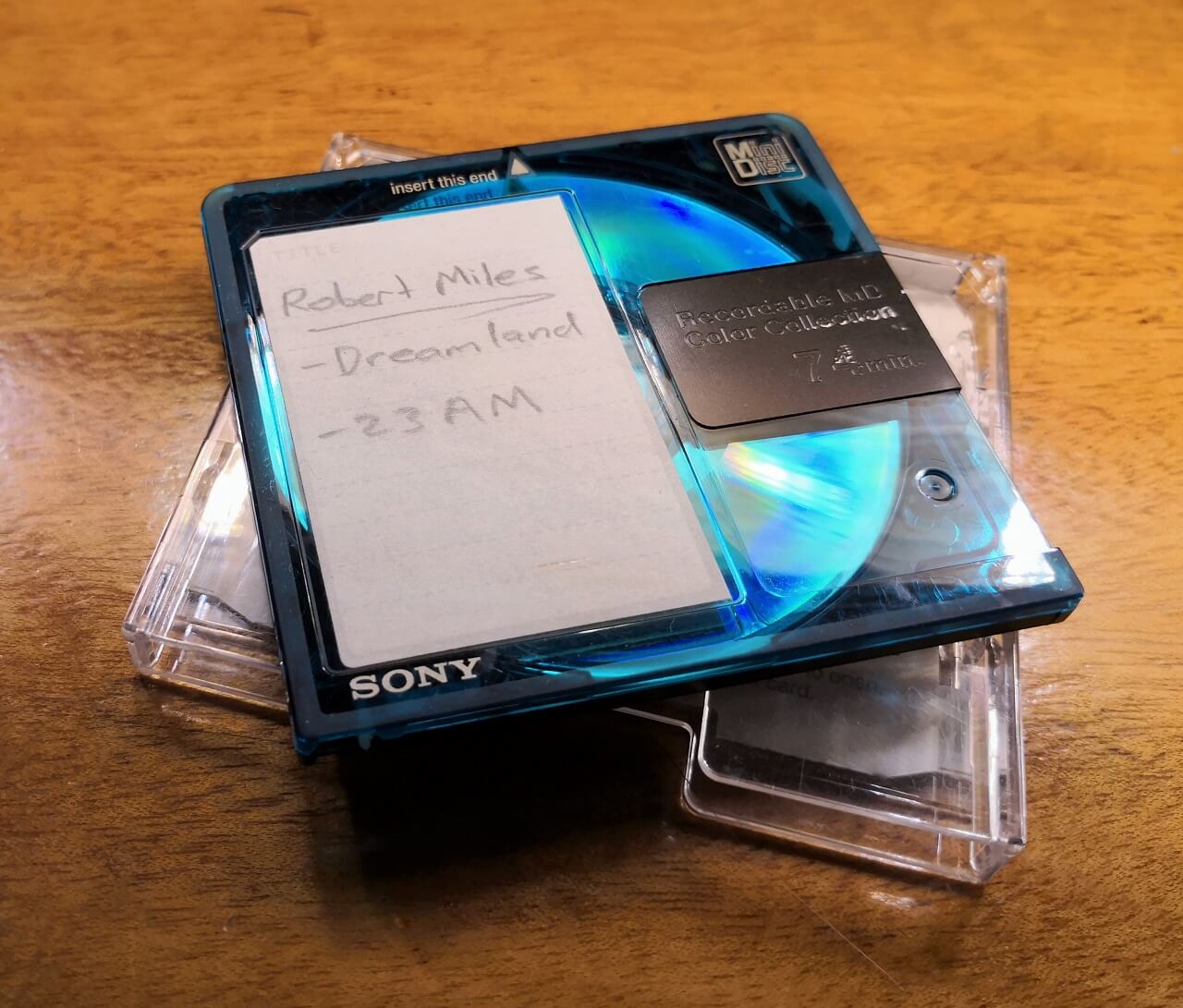 The bonus disc for “One & One” isn’t as good as the album, unless you’re into that kind of vocal dancey stuff.

I was always fascinated with the title of this album. Genius! There is no 23 AM! Combining military time with ante meridiem ticked all of the boxes for late 90’s me.

This album was released in late 1997 which wasn’t long after Dreamland. It certainly has a similar sound, but different at the same time.

The composition of the album started from the Dreamland tour, during which Robert Miles collected samples from lots of the cities he visited. The album reflects the human life cycle from birth to death, which explains why you can hear so many baby samples in the earlier tracks on the album.

Kathy Sledge of Sister Sledge appears on a couple of the more disco-sounding tracks, such as “Freedom”:

Having picked up the CD copy of Dreamland, my brother also bought 23am. I don’t think it got nearly as much rotation at home as Dreamland, however.

Leading up to the release of this 2001 album, I was fortunate enough to give away my personal information and join the very exclusive Robert Miles Fan Base (aka Fan Club). I’ve got no idea how many members they ended up having and I guess you could say memberships are closed now? But in return I got a massive stack of postcards and rad stickers to promote the upcoming album “Organik”. At the time, it was incredible to sign up to things online (via dial-up) and actually recieve things from internatioal mail in your real-life letter box.

I’m not sure where the stack is, around here somewhere, but I had to think of ideas of how I was to “hand” them out. That didn’t happen. Could I leave some behind at the library?

My Robert Miles “Fan Base” membership card in all it’s glory: 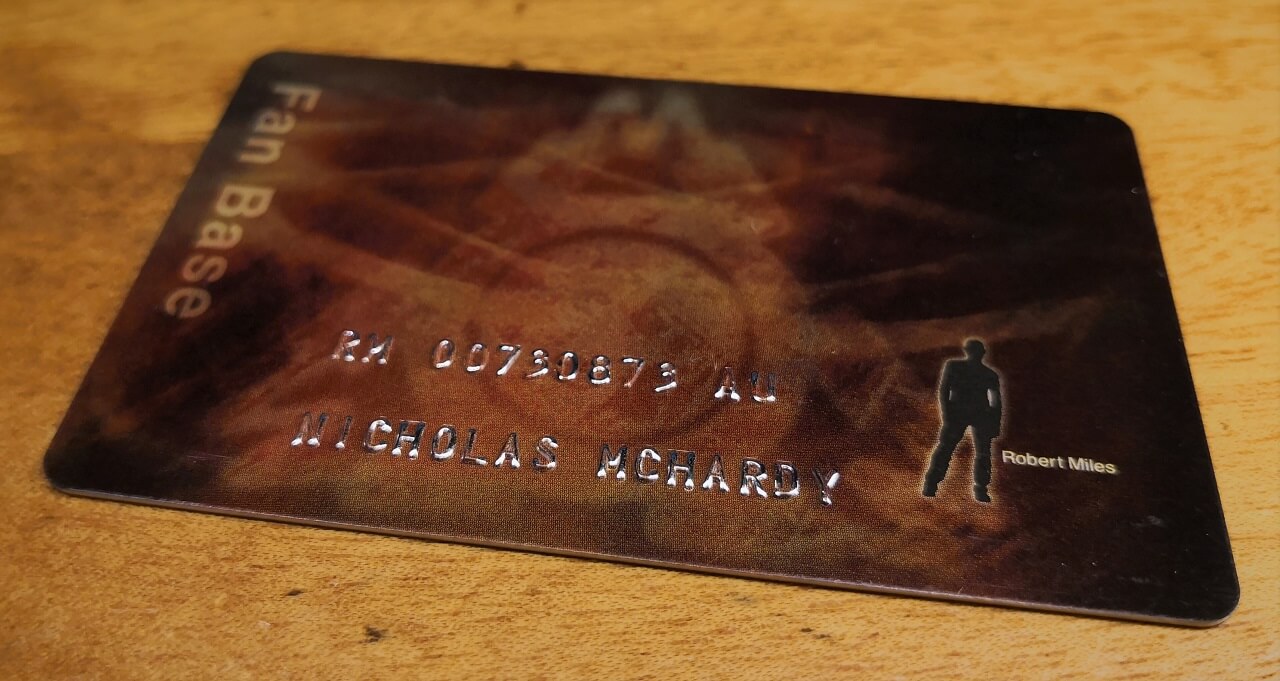 Here’s “It’s All Coming Back” to play whilst you work through this section of the blog:

This album was a massive shock to me and to other’s I’ve spoken to about the direction Robert Miles was heading.

Where is the dreamy trance?

Where is the classic 4-to-the-floor dance beat?

This was my first Robert Miles album I actually bought with my own money. I played this album more than once, just to check it was really Robert Miles, but could never really get into it at the time.

I look back, a bit older now, a bit more experienced with music and… I love it. The textures and the production are excellent. It’s not cheesey or anything that would chart well but it’s just musically really nice to listen to. There are some great, creative ideas here that Robert Miles explored and I’m so glad he did. It’s definitely got that “organic” vibe to the songs and despite being electronically produced, has a lot more heart and soul than expected.

It’s close to being my favourite Robert Miles album, maybe number 2, once I remove the nostalgia associated with his earlier works.

I do like how all tracks blend into a single long track for the whole album, so I would recommend listening to it in order, start to finish, uninterrupted, as was originally intended. If I ever write an album, I would be doing this as well.

This is an album I discovered during my “Fender Rhodes” obsession era (an era that continues to this day) and it’s an extension to the ideas and themes as kicked off by Organik. Joining Robert Miles for a second time is the world’s leading innovative and creative percussionist, Trilok Gurtu. Other big names include Nitin Sawhney on guitar.

2004 was a great year for Robert Miles. I mean, just listen to the first track from the album, it’s a monster:

This requires turning up LOUD and/or headphones for maximum enjoyment. I really like the jazz influences coming into this album which are punctuated with glitchy sounds. On some tracks, I get some Yello synth-pop vibes too, which is 110% a good thing. Perhaps an idea for another blog?

Recently I picked up a CD copy of this album, still in the shrinkwrap. It hasn’t arrived yet, but I’m definitely looking forward to putting that into the CD player and maybe throwing a copy onto an MD, too, for good measure.

I’ll leave you with the magic combo of Rhodes + strings in Golden Rust:

Robert Miles' 5th and final album, from 2011, is curiously named 13, although that’s because there are 13 tracks. Not to be confused with the album by Megadeth which had the same letters-replaced-with-numbers in the title as well as 13 tracks. And it was also released in 2011, just like Robert Miles album. WEIRD.

I haven’t had the chance to listen to this album in full yet, but initial impressions show me how it sways between a real peaceful vibe and a straight-down-the-line rock feel. Unlike anything we’ve heard from Robert Miles before, yet with still ties back to Miles_Gurtu with Urban Soul Orchestra returning for a second stint.

Have a listen for yourself.

The legacy of Robert Miles

Robert Miles may have established himself as a DJ and electronic dance musician in the 90’s but he really shined as a jazz artist, easily blending the sounds of old and new combined with a super group of highly talented musicians.

Sadly, he died of pancreatic cancer in Ibiza, Spain, in 2017 at the age of 47. At the time, there were many heart-felt reports and people looking back at the mid 90’s to be a better time. It was simply unbelievable that one of the greats from the 90s - not that long ago - were no longer with us.

In his later life, Robert Miles was instrumental in the Ibiza scene where he established the radio station “OpenLab”. This station was created to focus on a combination of innovative music and visual art to capture the creative spirit of Ibiza. Thankfully it’s still running today and you can find out more on the OpenLab website.

I’ve enjoyed the change of pace putting this entry together. I almost feel like this is my script for a radio episode dedicated to the late, great Robert Miles. Maybe one day it could be. I do miss talking about the music and I was thinking about a podcast, but having a music podcast just seems like too much hard work due to copyright.

In the meantime, I hope you’ve enjoyed hearing a bit more about the fella who brought dreamy piano riffs to the masses and some of his later works where he elevated his abilities into new and surprising places. Peace!